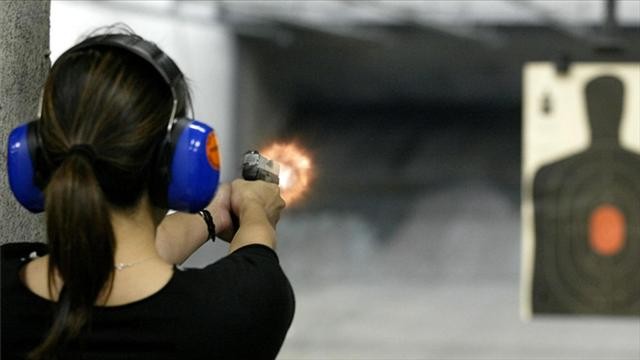 Law enforcement has made great strides toward equal treatment for women, but there’s at least one place that women are at a disadvantage when treated ‘the same’ as men: the firing range.

While it varies drastically from one department to the next, many firearms instructors agree that they have a harder time teaching some women to be confident with their firearms training. It’s not because they are less capable or because women don’t possess the same inherent skills as men. In fact, most firearms instructors agree there are plenty of instances that women are a better shot than men in their department.

So what is preventing the average female officer from excelling as quickly at the range as her male counterpart? At the 2014 ILEETA conference, firearms instructor Vicki Farnam told her “Women’s Firearms Training” class about some of the main barriers, and provided tips for how to get around them:

1. Women learn differently from menIt’s no secret that male and female brains differ in key ways. Generally speaking, men have spatial relationships, which means they can easily understand multiple shapes within a given space. Women have verbal relationships, which suggests that women use different strategies for spatial visualization tasks, namely through conversation.

Farnam said that when asking women where they aligned their front sight when shooting a target, 85 percent answered that they put it above the target’s shoulder, and most couldn’t explain why.

In most cases, women weren’t taught their line of sight needed to line up with the front and back sights of the firearm and the target.

When giving instructions, think carefully about how you word directions, making sure that you’re speaking clearly and literally.

2. Guns are not one-size-fits allHow many departments are given a choice of which handgun you carry? Not too many. Both men and women with smaller hands are often handed a gun simply too large for them to comfortably grip.

Members of Farnam’s class who either switched to or had the option of using 9mm versus .40 caliber handguns saw drastic improvements among women and some men because of the decrease in the recoil.

“Adjustable and interchangeable grips can also make a huge difference for women,” said Farnam. “Also, switching to a youth stock when you’re using shotguns is helpful. Mossberg has an adjustable stock that can be made very short.”

When the firearm is so large that the female officer is adjusting her grip to reach the trigger, she’s no longer able to provide backstop for the recoil energy. If pulling the trigger each time is causing physical pain, her focus may shift from remembering what she’s learned, to pulling the trigger as quickly as possible to get the pain over with. As a result, shooting isn’t viewed as an enjoyable experience and it’s not something she’ll be eager to keep doing (especially on her own time).

If the gun is too big, the slide often fails to cycle because of that left over energy from reaching for the trigger. When this happens, instructors often assume it’s caused by limp-wristing, when that’s not necessarily the case.

3. Male instructors fear getting “hands-on”Firearms training is tactical in the most literal sense. Sometimes, you need to be physically moving your trainee. Male firearms instructors are often too timid to do this with women because they fear invading a woman’s space and making her uncomfortable

The solution? Talk to them about it. Women can see that you’re also physically moving men’s bodies into position. It’s a necessary part of the job that can and should be done in a professional manner and without having to jump thought hoops or fearing retaliation.

4. Many women just have less interest in shootingThis by no means applies to all women, but some simply don’t find the concept of shooting interesting or comfortable. But if you can get down to the bottom of why it doesn’t pique her interest, it may be a simple fix.

First, try explaining exactly how a firearm works. As mentioned before, women are verbal and literal. If they know all the moving parts to a firearm and what makes it function and dysfunction, she’s more apt to take an interest in it.

Telling her things like “If you line up your eyes, your sights, the target, and pull the trigger smoothly, you will hit your target every single time” is going to build her confidence and push her to keep at it.

5. Trainers don’t adjust their approachThis isn’t to say that the flaw lies within the instructor, but all parties and the approach must be examined when determining what is keeping the trainee from excelling.

One issue that Farnam discussed was the discontinuity that happens when there are multiple firearms instructors. Hopefully your methods are uniform, but is your language?  Again, women are verbal, so saying the same thing two different ways can come across as hearing two different things.

The easiest solution to prevent this is to train with other instructors to ensure your instructions are equal and you’re using the same terminology.

If you’re a male firearms instructor used to teaching other men, who learn like you do, teaching a woman who requires different teaching methods can get frustrating. But exhibiting that frustration is going to do several things: It’s going to make her frustrated, it’s going to crush her self-confidence, and it may cause her to decide this is never something she’s going to be good at.

Learning doesn’t always mean retaining. If you have to start instructions at step one each time she comes to the range, then you haven’t taught her anything. Reinforce what you’ve told her by having her repeat it back to you.

Make a checklist of steps and have her repeat them:

3) Press the trigger straight and flat back

5) Bring the sights back into view

6. Some are intimidated by the overwhelming man-to-woman ratio Ever wonder why there are “just for women” gyms? This might come as a shock to you, but being surrounded by hyped-up men, especially in a situation where you already feel inferior, is a less-than-ideal situation. It may even be downright terrifying.

Why not host a “ladies’ night” at the range? Officers who said their departments or their local gun ranges had women-only nights saw a great turnout, the women didn’t feel the pressure, and they actually performed better.

7. There’s a lack of female camaraderieWomen are competitive by nature, and that’s not a bad thing. It’s competition that pushes us to be better. But what happens when your firearms instructor is a female, and sees you as competition rather than as a teammate?  PoliceOne columnists Nancy Fatura discusses this cutthroat environment and how to overcome it in her column “How not to sabotage your sisters in blue.”

Female leaders need to remember that as members of law enforcement, you’re all on the same side, fighting the same evil. Use your peers as motivation to improve but hold yourself as your greatest competitor.

Most importantly, as you rise up the ranks, remember what it felt like to have (or not have) a female role model to look up to, and inhibit the characteristics you think will most help your trainees.

If all this sounds like a generalization, it’s because it is. Of course there are women who excel in firearms training as fast or faster than men, and there are men that take more time than others. In fact, in the test in which Farnam said 85 percent of women aimed above the target’s shoulder, 15 percent of men asked the same question gave the same answer.

As the Associated Editor for PoliceOne, Loraine Burger writes and edits news articles, product articles, columns, and case studies about public safety, community relations, and law enforcement. Loraine has developed relationships with law enforcement officers nationwide at agencies large and small to better understand the issues affecting police, whether on the street, at the office or at home.