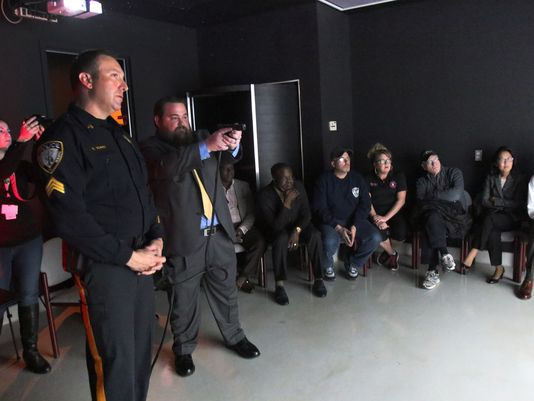 SCOTCH PLAINS - The daughter of a Linden police officer, Linden Councilwoman Gretchen Hickey has always had a passion for her local police department.

But now Hickey, who participated in simulated firearms training Friday, knows firsthand the split-second decisions officers in the field are forced to make.

Hickey was among a group of civic and religious leaders from Union County invited to the simulated audio and visual display training by the Union County Prosecutor's Office to experience what it's like to encounter a potentially dangerous subject and decide when and if to use a firearm.

“Firearm simulation training offers civilians a unique opportunity to put themselves in the shoes of law enforcement and witness firsthand what it’s like to make some of the high-pressure, split-second decisions we ask police officers to make in the line of duty every day,” acting Union County Prosecutor Grace Park said. “We think this creates a vitally important sense of perspective regarding policing, and we plan to continue to offer Union County’s religious, civic and community leaders a chance to experience it going forward.”

The training was conducted at the John Stamler Police Academy here.

"It's split-second decisions that nobody knows unless they are involved," said Hickey, who had shot a gun before. "So many trial and tribulations they (police) go through day in and day out."

Her late father, Linden Officer Douglas R. Brook, was involved in a shooting in the 1980s. According to Hickey, her father was involved in a 1983 shootout after a hotel was robbed in Woodbridge. Her father chased two men in a car into Staten Island.

"He (Brook) was shot in the face and it (the bullet) came out his neck," said Hickey, who was a teenager at the time.

Her father, a firearms instructor, returned fire, striking one man eight times. Both men were arrested. Her father arrested the man he shot.

She has heard the police radio recording of her father saying "I got one and caught one" referring to capturing one suspect and also being struck by a bullet.

Hickey remembers the knock at the family's Dewitt Street home by a family friend the night her father was shot. Police rushed her mother to the hospital while other officers wives stayed to care for her and her three siblings.

Her father returned to work after the shooting. But in 1993, two weeks after she got married, her father was in a serious auto accident on Park Avenue and Routes 1 and 9 in Linden and was forced to retire at age 47. Two years later, he suffered a heart attack and died following surgery.

"He lost what he loved the most," she said. "He never wanted to be anything more than a police officer."

Hickey said being a councilwoman brings her closer to what police officers go through.

"I have police officers who talk to me because I've lived it, I understand it," she said.