New Laser Shot Firearms Training System will let them practice handling situations in which they may have to use their guns, Amy Calder writes. 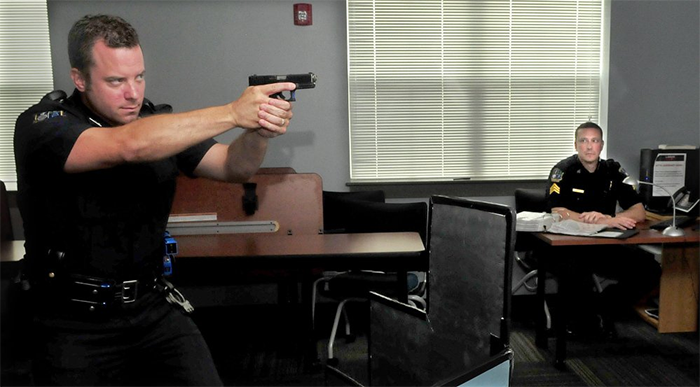 The silver pickup truck was stopped on the side of the road, as Waterville’s deputy police chief, Charles Rumsey,
approached the driver’s side door.

Rumsey had stopped the truck for speeding — going 43 in a 25 mph zone.
“Hello there,” Rumsey said.

The driver, a man, was agitated and loud.

“You guys are always pulling me over,” he said.

He also was arguing with a woman in the passenger seat.

She was chastising him for driving too fast; he kept telling her to be quiet.

The driver, ignoring Rumsey’s commands to show his hands, reached into the cab for something.

What? The vehicle registration or a handgun?

At that point, and quickly, Rumsey had decisions to make.

Things happened fast. The angry man thrust his hand out the window toward Rumsey, and Rumsey fired at what turned out to be a slip of paper — the vehicle registration.

“I just shot the registration out of his hand,” Rumsey said.

This situation was not real and did not occur on a Waterville street, but in the confines of the training room at Waterville Police Department.

Rumsey was demonstrating the department’s new Laser Shot Firearms Training System, which enables police officers to train with firearms in a setting closely resembling real-live situations instead of at a traditional firing range. Use of force, firearms drills and skill building are part of the program.

The traffic stop was illustrated using actors who appeared on a large screen via a multimedia projector and infrared ceiling cameras in the police training room. Rumsey used modified handguns and a rifle that do not fire actual bullets, but infrared laser “bullets” not visible to officers but seen by the camera system. The officer firing the gun feels the same sensation as he would if firing actual bullets.

Ryder was able to change the scenarios to produce different outcomes during the traffic stop. For instance, in one variation, the driver pulled a knife on Rumsey. In another, Ryder changed the outcome based on how the officer handled the situation.

The police department received a $10,000 training grant from Maine Municipal Association to buy the $20,000 system from Laser Shot Inc., of Stafford, Texas, and the City Council late last year approved spending $10,000 more from MMA’s Property Casualty and Workers Compensation programs reimbursement. Since the MMA’s focus was regional training, the Waterville department is training not only its own officers, but those from other departments in District 4, which includes all of Kennebec County and part of Somerset. Those departments pay a fee for the training.

“It’s just a great tool,” Waterville police Chief Joseph Massey said. “We’ve been able to start training all our officers and get a real foundation about where they are with skill level, accuracy, reaction time, threat assessment. We can also gauge their verbalization work at a traffic stop or other scenario. It’s an opportunity to evaluate their decision-making skills. When you look at all the police-involved shootings in the country in the last couple of years, which have faced great criticism, we want to make sure we train our officers in threat assessment. Is it a good time to draw a weapon? Is it not a good time? It provides all that, where we can actually sit back and watch the officer, step-by-step, during a high-risk traffic stop or domestic violence situation.”

The system enables officers to train at any hour of the day or night and in any weather, decreases overtime expenses and lowers ammunition costs. It also is less time-consuming than training at a firearms range, where officers must drive to the range, set up equipment and load firearms. It also presents a more real-life threat to officers, according to Ryder.

“We can turn an hour of available shift time into valuable training,” he said.

Ryder was familiar with the system and researched it further before Waterville decided to buy it, Massey said.

In another training scenario, Rumsey posed as an officer covering for his partner who responded to a report of a fight over a woman at a bar. When the officers arrived, a man in the bar was holding a gun to another man’s head. Rumsey’s partner headed into the bar and commanded the agitated man to put down his gun. He ignored the command, and Rumsey fired, hitting the suspect, who dropped to the floor. The hostage fled.

“We go through the scenarios, and at the end, we talk about why the officer did what he did, we discuss what he did well and what he might do differently next time,” Ryder said. “This format is very flexible and allows us to do a lot of things.”

Massey said the system evaluates an officer’s skills and sends a report back to his police department, detailing what skills he shows proficiency in and where he needs improvement and further training. That officer may return to the Waterville department for more training.

Ryder presented Rumsey situations in which he was asked to fire a certain number of rounds in so many seconds at targets that popped up on the screen. Those targets were men and women holding a variety of items including coffee mugs and handguns and Rumsey was instructed to shoot those who posed a deadly threat.

He also was instructed to fire at targets from standing, kneeling and prone positions and from behind barriers, as well as from stances where his back was to the screen and he had to turn quickly, pull his pistol from the holster, determine what characters on the screen were threats and then fire at them.

Rumsey is a good shot, by the way, hitting all but one target in the couple of hours I watched the system operate.

It’s not every day we get a bird’s eye view into how police officers train, and I must say I found the new firearms training system impressive.

Massey says it is one of a very few being used in the state, and the smaller the department, the less likely money and manpower are available for such a program.

Waterville has a history of being in the forefront when it comes to implementing innovative programs, including Are You OK?, which checks daily on people who are homebound, and the Wanderers Database, which maintains information about those who tend to wander and helps emergency workers locate them more easily and quickly if they do.

The laser shot firearms program is yet another example of Waterville’s launching a new system designed to help keep the public — and officers — safe.

Amy Calder has been a Morning Sentinel reporter 27 years. Her column appears here Mondays. She may be reached at acalder@centralmaine.com.